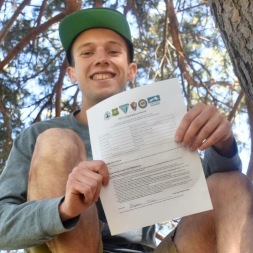 Thanks for joining me! My son Stephan has enjoyed backpacking the John Muir and High Sierra Wilderness in California with his dad since he was 10 years old.  Through-hiking the PCT has been one of his dreams and after months of planning, he is ready.  I will be posting PCT prep articles, backpacking recipes, pictures and progress reports as he travels from the Mexican border to Canada,  2650 miles, 4,265 kilometers.

“All that is gold does not glitter, not all those who wander are lost; The old that is strong does not wither, deep roots are not reached by the 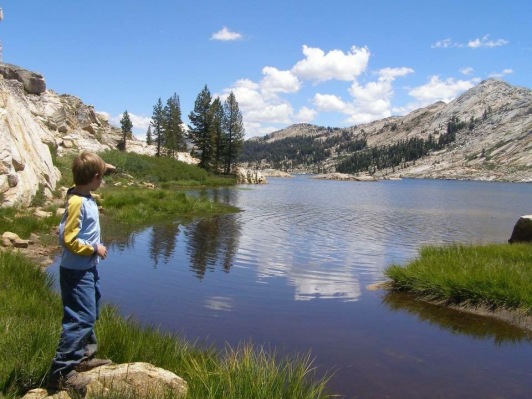 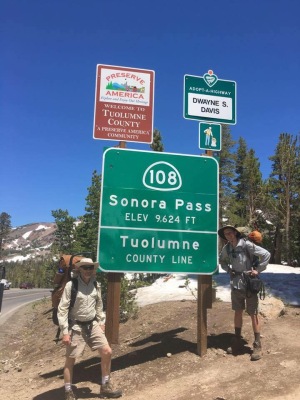 The family that backpacks together…..

Some of Stephan’s very first steps were taken in the Gallatin National Forest Wilderness of southern Montana.  He always wanted a walking stick. 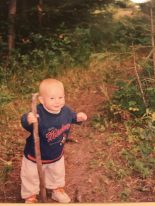 Then, when Stephan was 10, my husband proposed a “bachelor backpack” for our soon to be son-in-law Matt Hallock in the Emigrant Wilderness.  Stephan didn’t have to pack much that first time but he was the amateur photographer and he fell in love with the Sierras. He also learned to fish and set up camp. This is where the dream began.  Since then there have been many backpacking trips in the Ventana Wilderness near Big Sur and in the Sierras. Favorites include the John Muir Trail, and parts of the PCT from Tuolumne Meadows to Sonora Pass and then on to Desolation Wilderness near Lake Tahoe. 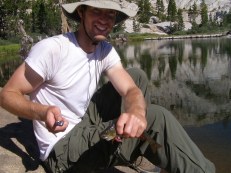 Matt at his “bachelor party”. 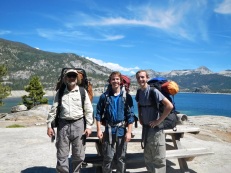 Who remembers sending kids off to summer camp? You probably labeled all their clothes, reminding them to change their socks and underwear at least once. You packed sunscreen and persuaded your child to use it. And you sent mail long before your child even left for camp, trying hard to write something interesting that hadn’t happened yet. You didn’t want your kid to be the one just sitting there feeling homesick during mail call!

That is how it feels preparing and mailing re-supply boxes of food and supplies to destinations like Idyllwild and Big Bear City before your through-hiker has even hiked the first mile. Most of the postal service locations I have talked to will hold packages for 30 days.

Stephan wants to start at sunrise tomorrow, so we decided to get within a reasonable distance, where we would only have to get up at 4:30 am to drive to Campo, CA. We decided to pay a visit to the delightful, historic mountain town of Julian, get a comfortable nights sleep, Stephan’s last in a real bed for a while. He also did some gear check and ate a lot of fresh greens, veggie pizza and enjoyed some famous Julian apple cider. The town welcomes and caters to PCT through-hikers, it is just a few miles from the trail. 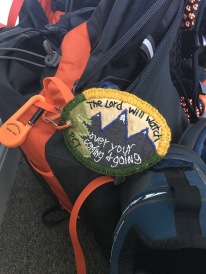 The patch I made for him.

Testing his home away from home! 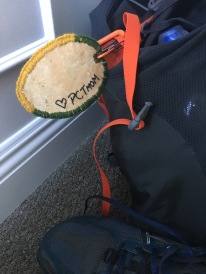 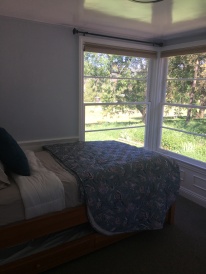 Comfy room with a view!

He’s off! Not quite sunrise but close. A very helpful guide, named Jay, greeted us at the PCT Trailhead. He completed the PCT in 2016 and had plenty of stories. Stephan was anxious to start, nervous, and very excited. We took advantage of time for photo ops, prayer and hugs. What WILL Stephan do without his backpack buddy and guide? Yeah, that guy who wishes he was going too! 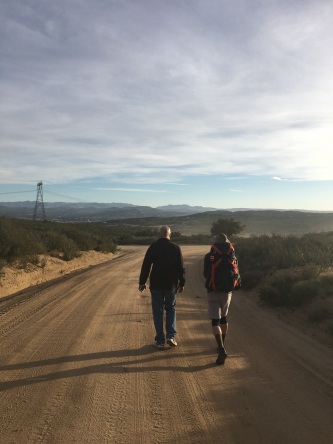 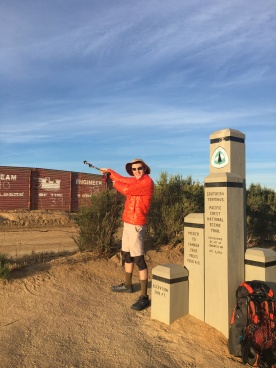 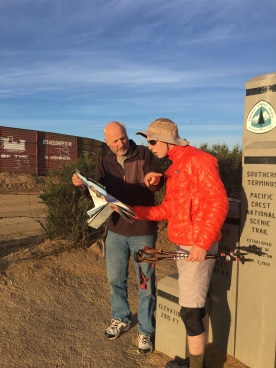 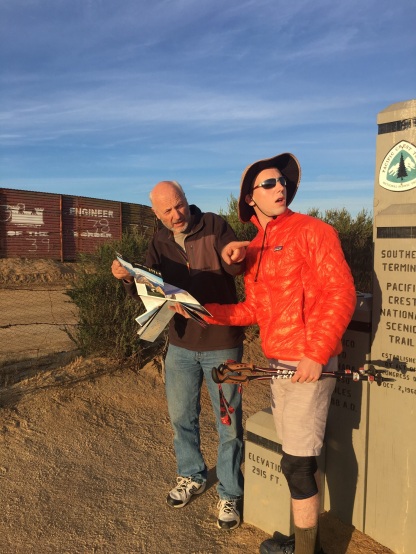 According to SPOT, his gps device and tracking link, he has completed many miles already and is north of San Diego, 32.6056 latitude, north of the town of Julian! 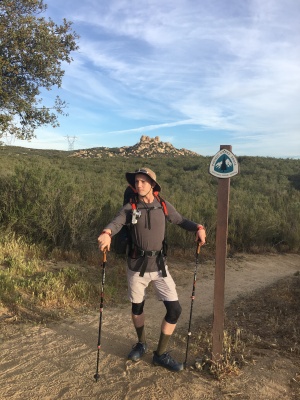 Just look at that sky! 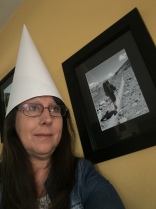 So, Granny Hat is wearing a special hat today!   Feeling ashamed, I was just going to delete yesterday’s mis-information and hope nobody, certainly no seasoned through-hiker, noticed.  But the error brings up an interesting discussion.  It is very easy and lazy to trust technological devices without comparing the information to a real paper map which could remind you that Julian is a full 70 miles north of Campo, CA.  And while my through-hiker IS a super-hero, unless he hitched a ride on one of those border patrol ATVs there is no way he could have covered that much ground.  Not to mention that I spent the night of May 7 in Julian and then drove to Campo so I should have known better. Granny Hat is doubting her short-term memory!

Stephan and I checked his SPOT to make sure it was working late on May 7 in Julian, CA.  so SPOT kept the Julian marker on the map and it confused us. Super-hero hiker’s  Air Force brother understands these things and explained that he gets the coordinates off of the SPOT app and checks them with Google Maps which is easier to navigate. He has informed us that Stephan hiked 27-28 miles yesterday.   Granny Hat likes gentle, sloping hikes in the trees under 15 miles round trip so this seems impressive to me.

He was up early this morning burning up the trail and I will keep all of you posted.  Thank you for praying and for following.  It means the world to me to share the adventure with all of you.

A couple pics from Stephan’s hike today toward Mt. Laguna, including a new wilderness danger I hadn’t considered: 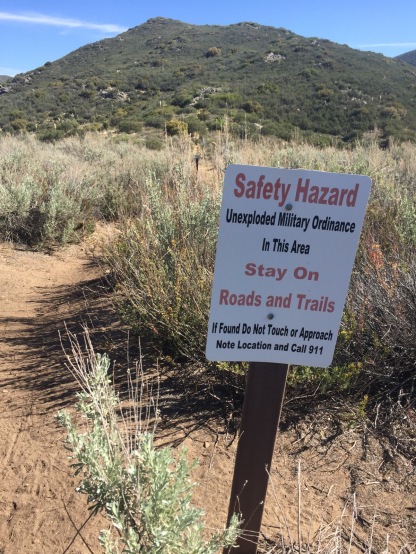 something else to worry about

pines in the desert mountains of San Diego County

Some more silly pics from the trailhead and the border wall: 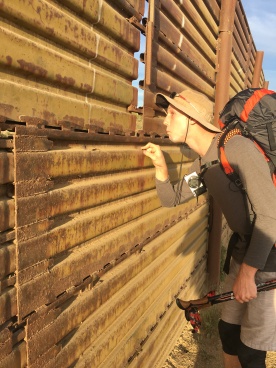 Looks pretty much the same as CA 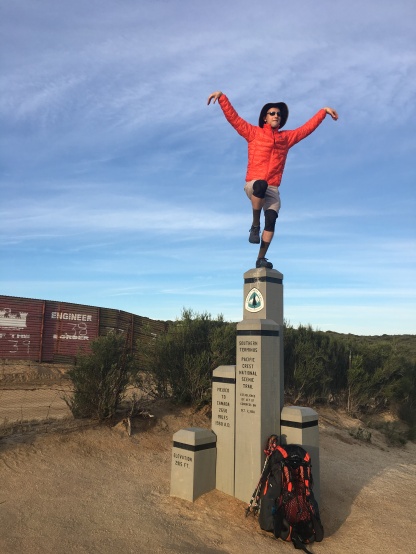 It is traditional for through-hikers to adopt a trail name.  Apparently, a set of unwritten rules about this exist. 1. You cannot bestow a name upon yourself, it must be given to you. 2. You can refuse a proposed name and hope for a better one. But sometimes other hikers will continue to call you what they want. Last summer Stephan met a through hiker on a portion of the PCT near Donner Pass named “Large Pizza”. He explained that he stops in every town and orders one so his trail buddies decided that was his name.  😉  There are cool names already spoken for like Strider, Cougar Bait, Banjo, Skeedaddle, Rooster, Crazy Horse, Coyote, Naturally Caffeinated, Wizard or Solstice.  Stephan announced today that he is MISSION! I will publish the story when I hear it.  But for now I can imagine that someone on the trail noticed his commitment and commented that he travels like a man on a MISSION. He completed another long day of hiking, bringing him to mile 77, only third day on the trail.  He has been starting early before sunrise. Today it was 4:30 am. So he was up for the gorgeous desert sunrise.

MISSION sent us this picture yesterday, May 11.  It reminds me of a song I used to sing to my kids. It is based on Psalm 121, the theme verse I chose for this blog.  The last verse in the chapter was painted on Stephan’s bedroom wall when he was a tiny baby by our dear friends, Tricia Harvey and Lisa Henson. “The Lord will watch over your coming and going, both now and forevermore.”   I am counting on those words to be true and this photo Stephan took seems to prove that God is watching over him as he hikes long 20+ mile treks every day in the wilderness of southern California. 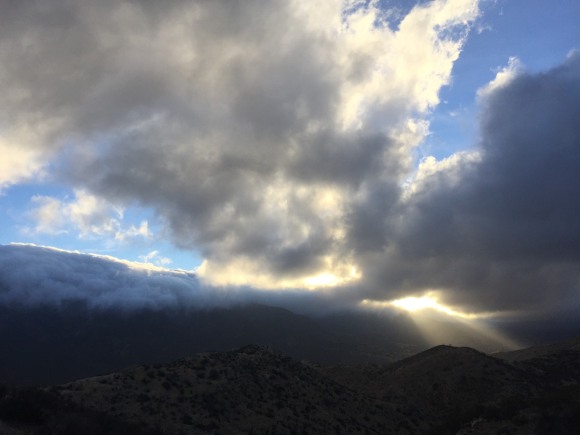 Our family needs an intervention!  We have become addicted to SPOT, the tracking device that Stephan carries on his pack.  Yesterday, he turned it off to save battery because he was resting some very sore, tired ankles and feet. We all freaked out. No less than 30 texts went back and forth between all of Stephan’s siblings.  Granny Hat had a mild panic attack, was checking and rechecking the SPOT app every five minutes.  Then I was reminded about the weeks of backpacking my family members have done over the years with me tending the garden at home.  It was rare to get an occasional phone call or text.  You get used to the “no news is good news” idea.  But now with SPOT we feel entitled to know where he is at all times.  We are calming down now and getting used to the rhythm of his trail and his schedule.  And learning to trust in God and in Stephan’s trail wisdom more than on a device that needs batteries to blink.

And per my post several days ago, MISSION has officially passed Julian now and is headed toward Warner Springs, a small community where he can rest, get re-supplied and maybe have a really good meal that he didn’t have to flashboil.  He says an Aussie friend on the trail named him MISSION because he wears a cross around his neck and is a man on a mission.  I like the name, it fits Stephan’s personality.  He has tremendous focus and determination.  I guess you need those two qualities to endure an adventure like this.  Thank you for keeping up with me. And one more: Eagle Rock